This may come as a surprise to many husbands, but for wives it just confirms what most already know.

A study claims that, even in the 21st century, women still do 70 minutes more of household chores per day than men.

Women in the UK spend an average of two hours and 49 minutes cooking, cleaning, washing dishes and laundry.

But men only spend an hour and 39 minutes on similar jobs, according to research.

Women in the UK spend an average of two hours and 49 minutes cooking, cleaning, washing dishes and laundry, but men only spend one hour and 39 minutes on similar jobs, a study has found. [File image]

Scientists analyzed more than 200,000 people in ten countries in Europe, Asia and North America for the study published in the journal PLOS One.

Dr Joan Garcia Roman, who led the study from the Center for Demographic Studies in Spain, said: ‘When men do less housework than women, that’s a choice, and men should really try to make things more equal.

“It may be the tradition in some countries for women to do more household chores, but times have changed.”

Women are also taking on more childcare responsibilities, including playing with children and helping them with homework, as well as caring for other adults.

In early adulthood and middle age, between 30 and 44, women spend an average of one hour and 22 minutes a day caring for others, while men only spend 38 minutes. in comparison.

The burden of household chores and family responsibilities could explain men’s abundance of free time compared to women.

In the UK, they enjoy an extra 45 minutes a day watching TV, the internet or other screen-based leisure activities compared to women, and on average spend more time a day doing active things like tennis and cycling. 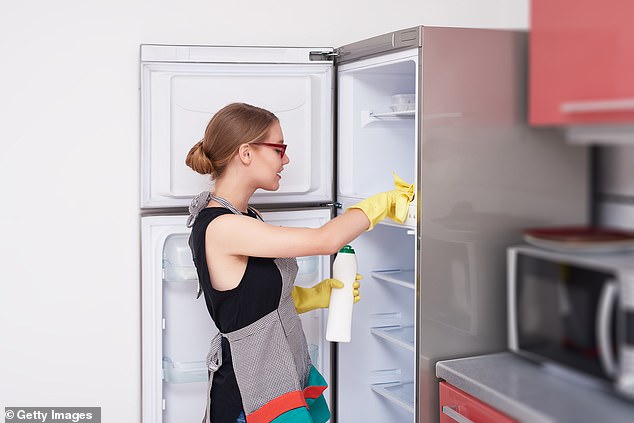 Scientists analyzed more than 200,000 people in ten countries in Europe, Asia and North America for the study published in the journal PLOS One. [File image]

The researchers also found that, on average, most household chores were done by Italian women, who spent four hours a day doing it, although this may reflect the importance of cooking and food in Italian culture.

The least time was spent on housework by women in the United States, who spent an average of two hours and 32 minutes per day.

Men and women recorded how they spent their time over a year, with the results averaged to provide a snapshot of a typical day.

The biggest gender differences were in women doing more housework and caring for others, while men spent more time in paid work.

The study authors note that this mismatch could see women financially hurt and stressed.

Men and women have roughly the same amount of sleep and time to eat in the UK.

However, men had 41 minutes per day of active free time to exercise, compared to an average of just 29 minutes for women.

They spent three hours and 19 minutes relaxing in front of a screen, compared to two hours and 34 minutes for the women.

The study, which used survey data collected in 2014 for the UK, found the biggest disparities in how men and women spent their time in South Korea, Hungary and Italy.

In South Korea, men did on average only half an hour of housework a day, while in France, men did almost two hours.

The battle of the sexes is more even in the UK, US, Canada and Finland, researchers have found.

The results reveal some interesting differences between countries, with the French spending two hours and 15 minutes on meals and the Italians an hour and 45 minutes on average, while men and women in the UK spend less than 90 minutes on meals.

But men in the UK, compared to those in other countries, spend the most time in front of screens, which could increase their risk of obesity and cardiovascular disease.

However, there is hope for men, who seem to get better at household chores as they age.

The average man in the UK did two hours and 34 minutes a day of household chores after the age of 65, compared to just around an hour for those aged 18 to 29.